Design creates space for feminist resistance on the streets

WHOSE.AGENCY is a digital advertising campaign operating on the streets of Leipzig. Created by German graphic designer Anja Kaiser, the project describes an informal advertising agency that works exclusively for feminist resistance by designing high-quality classified ads. It was awarded the INFORM award for conceptual design in 2017. Kaiser used the funds from the prize to set up her website and digital platform in order to promote feminist causes and support digital self-empowerment.

During her studies, she had already investigated feminism, both visually and theoretically. Her graduation project was: Sexed Realities — To Whom Do I Owe My Body?. Kaiser explains: “As in all other areas, it is Western and male-dominated historiography that bars a view beyond the eurocentric horizon of the graphic design scene. I’m searching for alternative historiography in graphic design. I’m inspired by designers like Sheila Levant de Bretteville, whose visual practice is shaped by political activism and the women’s rights movement in the 1960s and 70s in the USA.” She is active in Leipzig’s club scene and — in collaboration with various subcultural spaces and feminist groups — has contributed to many projects and their graphical translation.

For WHOSE.AGENCY’s open call, Kaiser invited networks, political groups, musicians, cultural producers, and artists from the local and international feminist milieu to author a classified ad with free design and placement. Those who wanted to participate could choose from two ad categories: WANTED and OFFER, and could select their own message — whether it was to demand a salary for reproduction work, a personal ad, a political group statement, or a call for donations.

Utilising Leipzig’s Digital City Light Posters as a medium for signage, WHOSE.AGENCY predominantly created the brand staging for commercial entities such as Parship, H&M, City-Branding, et al. Digital City Light Posters provides large-format, stand-alone screens installed on retail-dense streets, which enable the use of moving images. For the visual translation of classified ads, Kaiser worked within a purely formal typographic framework, with the goal to tackle the visual environment and demand a share of the market on the agency’s own terms.

With this project, Kaiser aims to form alliances and push political, polemical, fictional, emancipatory, or humorous feminist community demands within a setting of goods exchange. She is creating free space with cutting-edge design for those who are marginalised and often invisible in the public visual space.

The WHOSE.AGENCY project was shortlisted for the renowned Beazley Designs of the Year awards in 2019 and exhibited at the Design Museum in London. 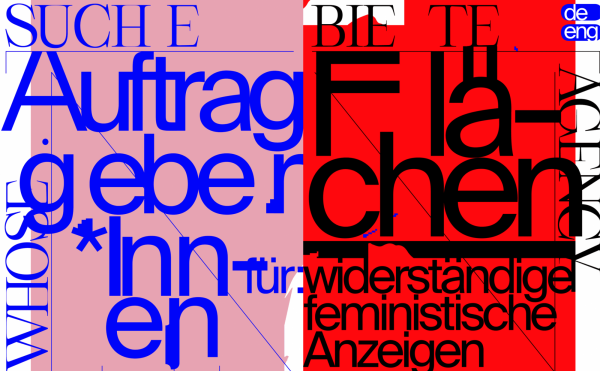 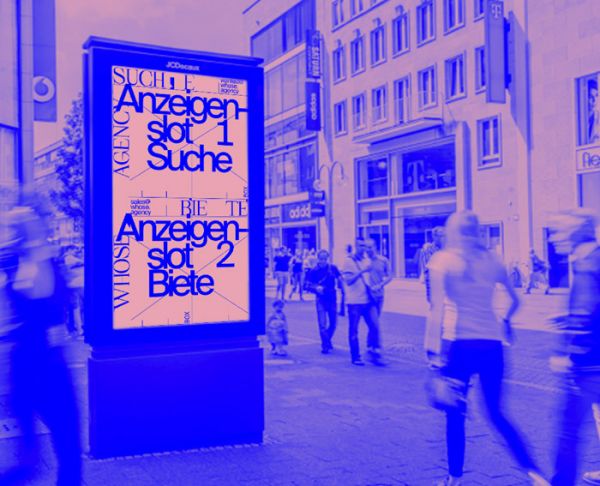 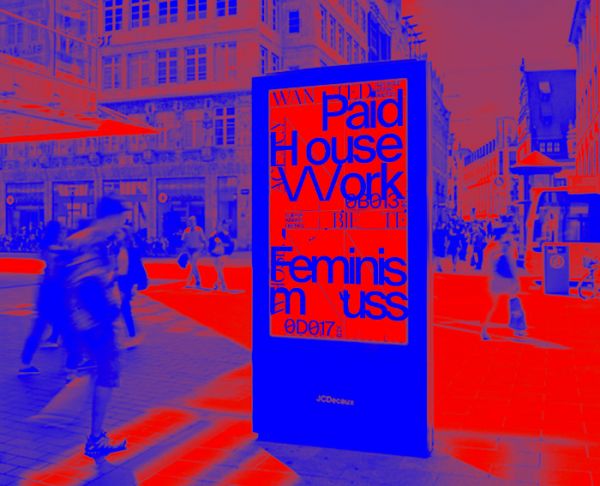 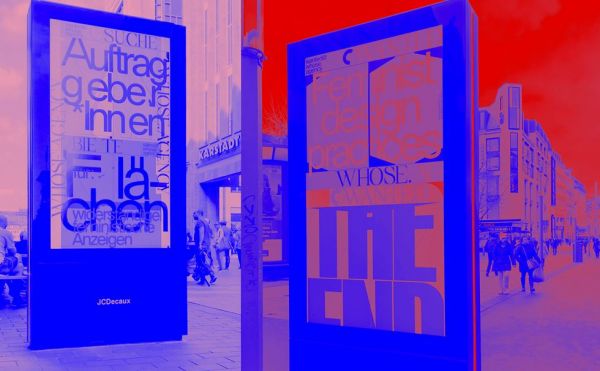 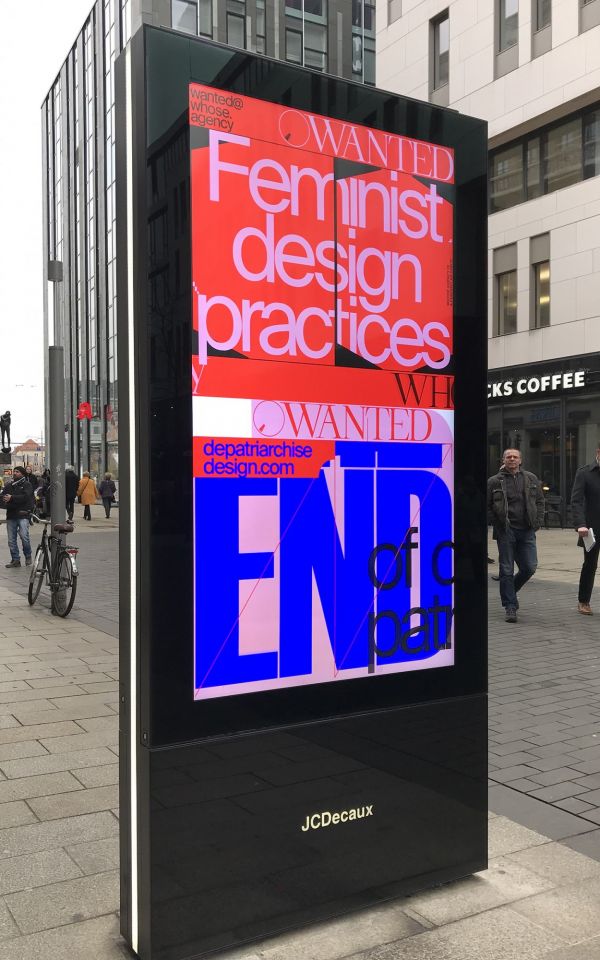 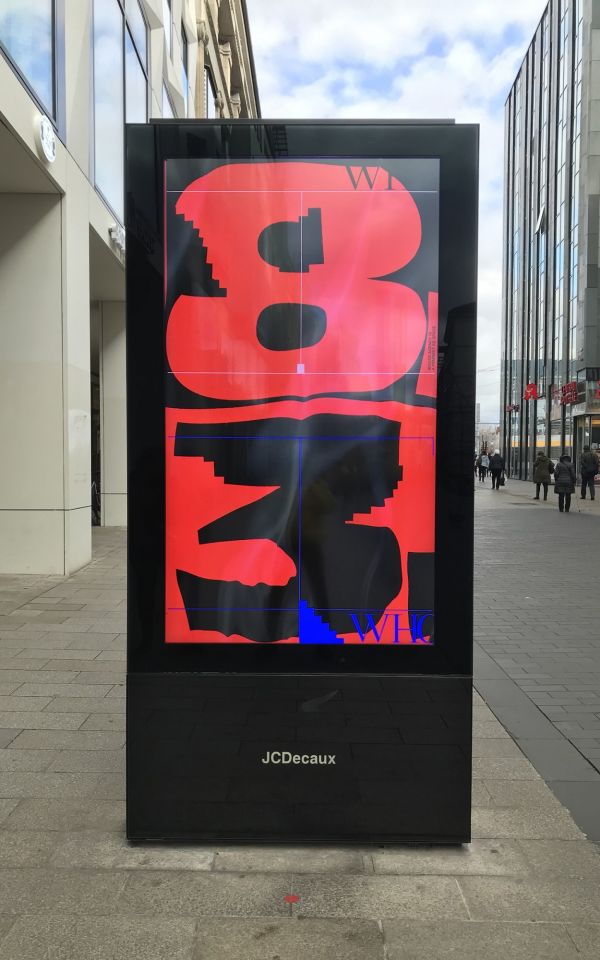 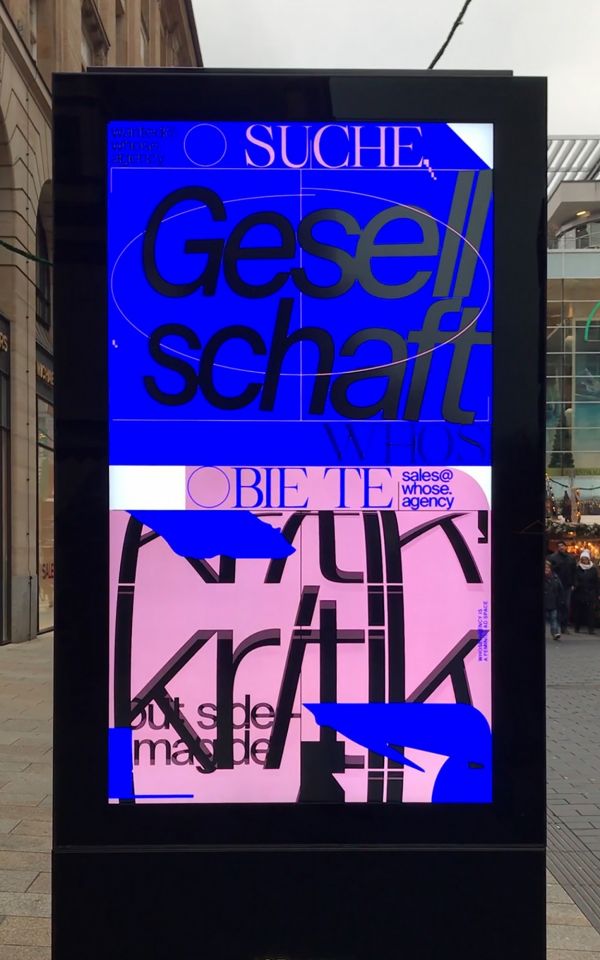