This is not national pride, this is a fascist farce

This poster was created because of my dissatisfaction with the current political situation. After several long years of rule, the SMER party escalates tensions, anger, dissatisfaction and other negative emotions in people. Add to this the murder of a journalist and the roll-over of several huge cases, and we have perfect conditions for the birth of extremism. And that is the Kotleba Party - Ľudová strana Naše Slovensko. He builds sympathy on topics such as the migration crisis, the LGBT community and many other sensitive topics that polarize the Slovaks for a long time.

Just before the parliamentary elections, this party is, according to polls, the second strongest. Conservative-minded people are willing to forget who Marian Kotleba is. They forget that he and his party supporters were walking in the streets in the Hlinka guard uniforms a few years ago. They went to the grave of Joseph Tis and shouted slogans such as "To watch!" from the time of the first Slovak Republic, which was a satellite state of Nazi Germany.

For all that I have described, I decided to respond with my poster. I work in it with symbolism. I used the white cross of the Hlinka guard, which the party used in the past as its logo in conjunction with a green background. I spiced up the whole visual with something I knew would be angry with the party's supporters. I placed a Nazi eagle above the Hlinka guard symbol. By this I wanted to point out that this false national pride is still under fascist ideology. I added this with the text “This is not national pride. This is a fascist farce. ”

My target group was the voters of this party. I wanted to evoke emotions in them and see if anyone would be able to oppose this with constructive arguments. I decided to get into a few closed groups of this community under a fake Facebook profile and publish this poster there. I only got into one, the post lasted for an hour. During that hour, in the comments, I only received insults and ridicule. After an hour, the post was deleted and my profile was dropped from the group. They also reported me and deleted my profile from Facebook. Profanity, mockery and subsequent deletion of the post.

I added stickers to the project to show how the public will react to such a visual in the real world and not just on the social network. I glued the stickers to various public places and followed their development for a few days. The stickers are still undamaged, so many people have not yet seen them or have not yet been hit by voters of this party. I intend to continue to monitor the development of these stickers.

The aim of the project was not to convince their supporters of what was right, but I just wanted to point out that even their own voters cannot adequately and reasonably defend this party. Anyway, I know that there are many decent and normal people, whose situation in Slovakia drove to the choice of such an extreme.

This project was created during the course Critic – Critical practice in Graphic Design at Department of Visual Communication at Academy of Fine Arts and Designin Bratislava. Tutored by Katarna Balážiková. The course foucuses on practicing and developing individual or collaborative critical projects. 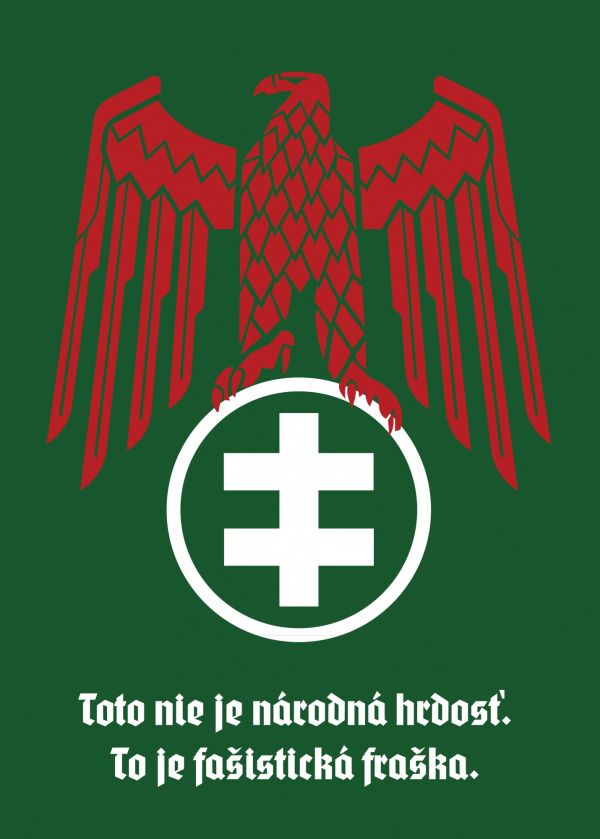 This is not national pride. This is a fascist farce. 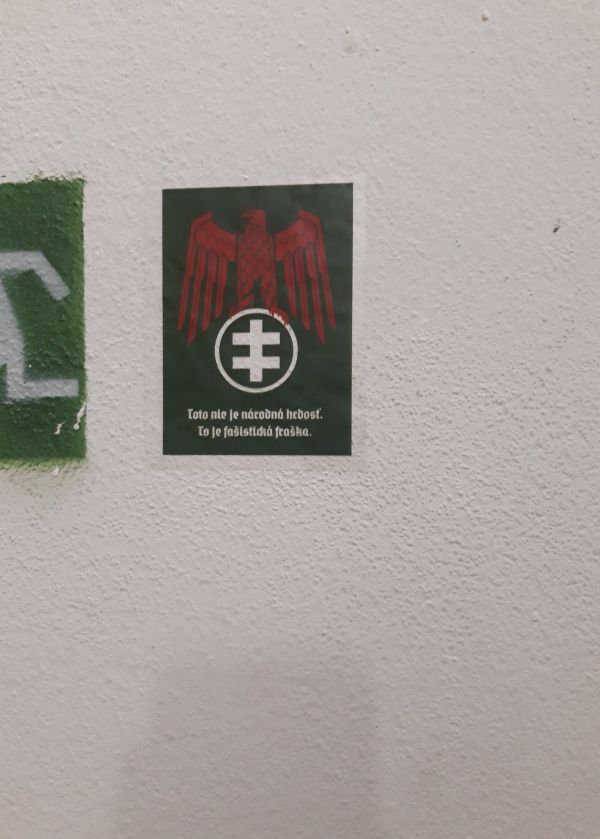 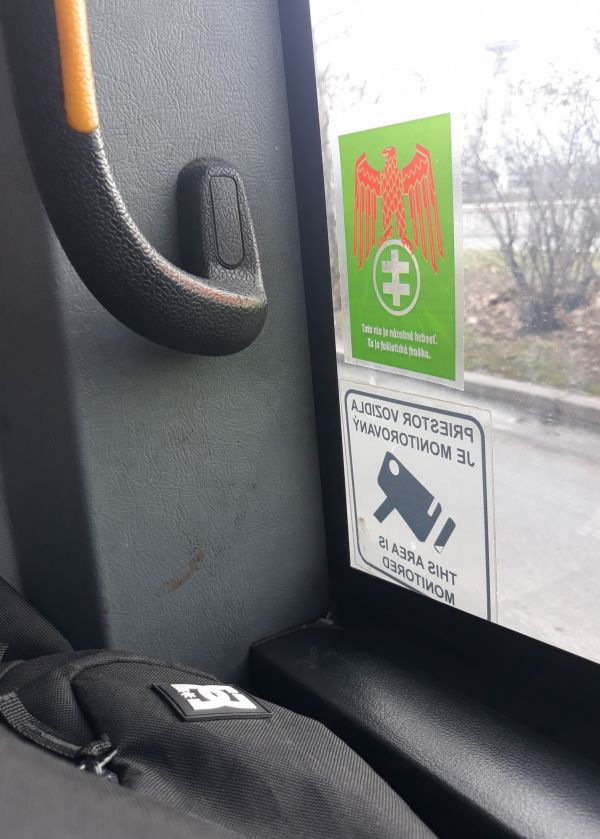 Bratislava Bus number 39, Bratislava. This bus is regularly used by many students. I wonder what the sticker will be the next time I come across it. 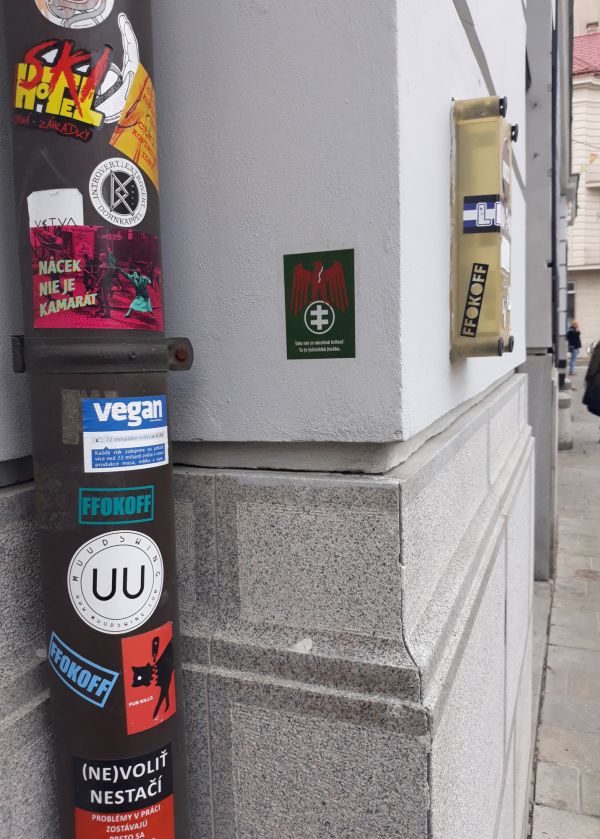 This gentleman thought someone was paying me. If somebody paid me to bother the fascists, I would probably have a dream job.

The first word I do not understand myself anyway the lady found that my profile is fake. And, of course, I am a dick, as for almost everyone else who commented on the post.

Mr. Mydlo writes that the cross and the eagle are quite common Slavic symbols. What is not far from the truth, but specifically these two symbols used on the poster are associated with fascism and Nazism and not with national pride. Finally, he mentioned that the swastika is also a Slavic symbol and must be perceived. I think this last sentence does not need a comment.

If this is a fascist farce, you're a complete dick.

Although I like the online action in FB neo-nazi groups, it could be expected the ultra-right followers will not respond critically to it. On the one hand, I think it's always great to mock these guys and spice up their daily life with some irritation. On the other hand, it probably requires more sophisticated ways of persuading to change their opinions. I guess this project works the best in public space after all, where it can help explain the connection between Kotleba's party and neo-fascism to potential voters who fall for Kotleba from sheer disillusion.