Any ephemeral theme can become a subject for science and design

The former president of Czechoslovakia, Václav Havel, in one of his speeches mentioned a term that has become popular – a stupid mood (blbá nálada). In two words, he described the feeling of disillusionment in society in the second half of the 1990s.

The mood of society is something that is difficult to measure and describe, an ephemeral atmosphere that is not necessarily negative in nature. It is important for its emergence that a critical mass of people are placed in a similar situation. The COVID-19 pandemic and its consequences for our everyday lives have also brought about this effect of shared experience. The debate about the psychological health impacts of pandemics is already underway. The study and sub-topics in the field of psychology are becoming part of this discourse, and one of them is the theme of the science of forgiveness.

What is the science of forgiveness?

"Research has shown that forgiveness is linked to mental health outcomes such as reduced anxiety, depression, and major psychiatric disorders, as well as with fewer physical health symptoms and lower mortality rates."The science of forgiveness, as one area of psychology, explores the links between forgiveness and mental or physical health, it develops and tests methods of working therapeutically with the process of forgiveness. The first reflection on the topic by the scientific community dates back to 1989.

Creative studio Pentagram, through a team led by Giorgia Lupi, is dedicated to the development and design of Discover Forgiveness, an interactive online database. Together with a team from the Templeton World Charity Foundation (TWCF), they conceptualized a collection of scholarly publications and studies on the topic of forgiveness that is accessible and understandable to a broad audience. The use of the database is envisaged by professionals for whom working with the topic of forgiveness is an important issue. If we have not already thought about this theme, we will be surprised to find that, in addition to representatives of the Church and psychologists or therapists, these include educators, politicians, academics, and scientists.

The database is based on a simple collection of scientific texts and attempts to visualize and organize it with filters. The designers have found an everyday object that they metaphorically associate with the theme and use it also visually – a patchwork quilt.

"Each research paper is represented by a piece of 'fabric' in the quilt that offers a data portrait of its theme and geographic focus. The themes (education, religion, family, etc.) are color-coded, while geometric patterns indicate the geographic regions where it originated (Africa, Europe, Latin America, etc.). These colors and graphic motifs may be combined if the papers cover multiple criteria." Read more about the visual philosophy in the story of the project. 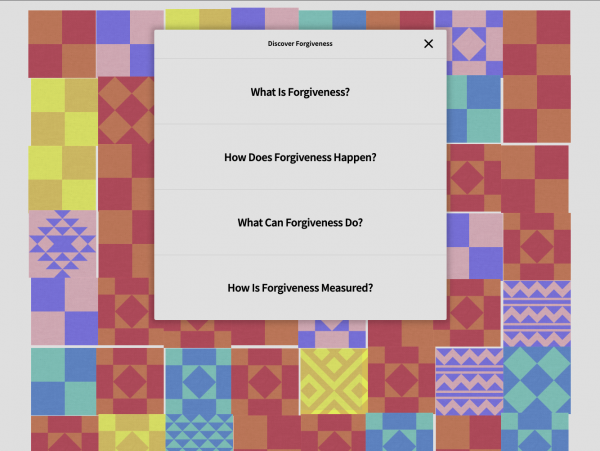 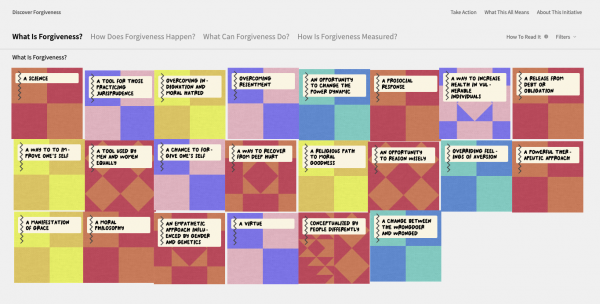 Discover Forgiveness website, a quilt with links to articles (screenshot, 2021) 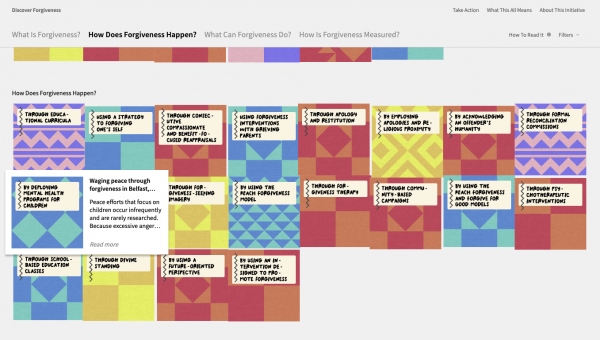 Discover Forgiveness, a quilt with links to articles (screenshot, 2021) 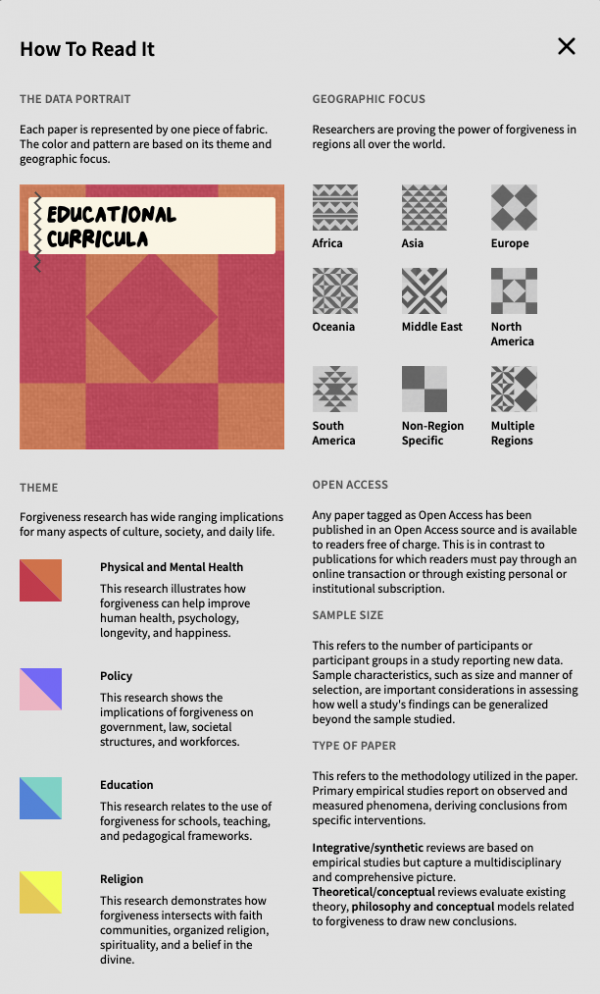