Design as a discipline occupies a powerful position, when well applied. Through its visually striking and often symbolic language, it is able to speak to a variety of people and professions. Design can reflect social, cultural, economical, even political issues, critically commenting on today’s society by translating key messages into visual form.

Highlighting this is Open Design Studio, the nongovernmental organisation that organised the project OPENEON in Bratislava in 2009. It familiarised the public with visual communication as a discipline that can express critical views on present-day political and social issues, while also being relevant in the context of contemporary art. Neon lights often relate to the urban environment, mass culture and advertising. Connected with consumerism and cheap entertainment, they often lack artistic value. The aim of the OPENEON workshop was to utilise neon lights as a design material, as a way to open the eyes of city dwellers.

OPENEON included three phases: a workshop, an exhibition, and installations in the public space [NEONTOUR].

The workshop was attended by 12 people, students from the Academy of Fine Arts and Design and the Slovak University of Technology, as well as professional designers from Slovakia and the Czech Republic. It was led by a team of graphic designers and organisers: Katarína Balážiková, Branislav Matis and Martin Mistrík.

The aim was to foster collaboration between 2D graphic designers and 3D product designers, by pairing one of each. These duos came up with a topic to work on, having been given a list of different subject matter to choose from. The resulting ideas were later transformed into real neon lights.

The exhibition took place at OPEN Gallery in Bratislava in early 2010. In this phase, the results of the workshop were presented as artefacts. Visitors could also choose one to borrow and display on their own company premises – in the third part of the project, NEONTOUR.

Via NEONTOUR, the results of the workshop were tested in the public environment. Displayed in the windows and hallways of cultural centres, institutions, design shops, galleries and bookshops, they were destined to improve the informational value of such places. In a creative way, people could get to know graphic design and visual communication as a discipline that can be useful and critical to everyday political and social issues. Each displayed artefact came with a map of the neon tour; viewers could readily visit all the installations throughout the city. Easily transportable, the project was shown several times in Bratislava, Trenčín and Prague.

These neon projects not only offered an aesthetic experience but also opened up topical and global issues of interest to us all, enhancing the social aspects rather than individual needs. The cultural and design sectors can greatly amplify today’s crises to instill awareness, and might just be the informative data/heart-driven game changer. 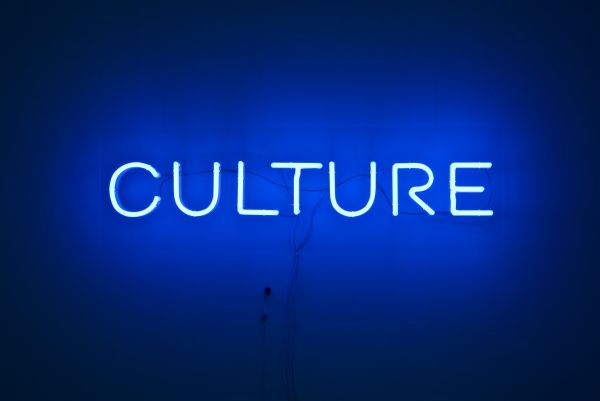 CULTURE searches for the meaning of the word ‘culture’ in relation to the environment. It does not explore its genesis, but rather, the change and use of the keyboard in social as well as individual life. The authors are Elena Bolceková and Alica Horváthová. 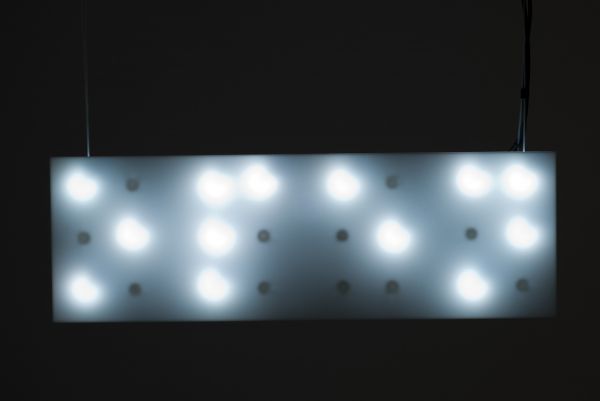 NEONSIGHT turns our attention to the blind and at the same time considers blindness in society. It says ‘Open’ in Braille, by lighting particular dots, thereby creating a paradox: that the blind cannot see it or read it and the rest of the people can see it but cannot read it. The conclusion lies at the backside, where all the cables are folded to form the word ‘Open’. The authors are Cyprián Koreň and Barbora Tobolová. 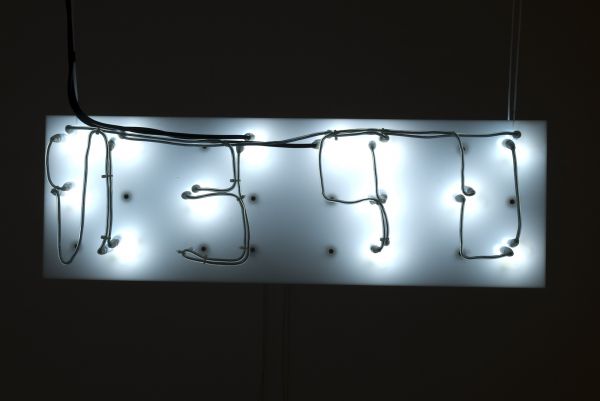 The back side of NEONSIGHT. 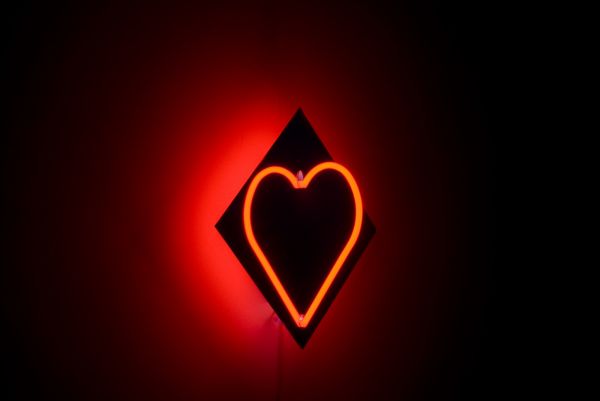 POINT OF VIEW uses optical illusions and a variety of angles from which to view the piece. A neon object changes in a playful way and lends an elegant overview at the same time. Its sign warns us: Is it love, sex, or kitsch? The authors are Ondrej Alušík and Matúš Lelovský. 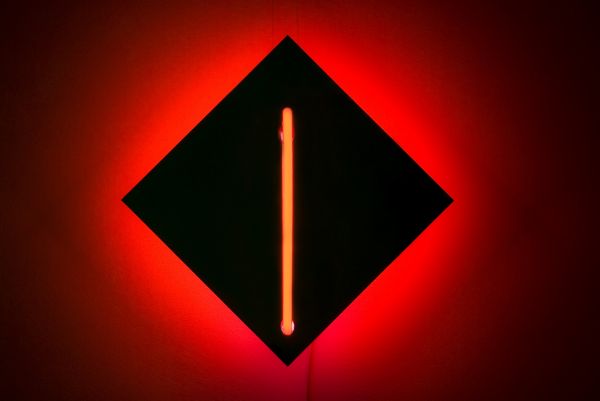 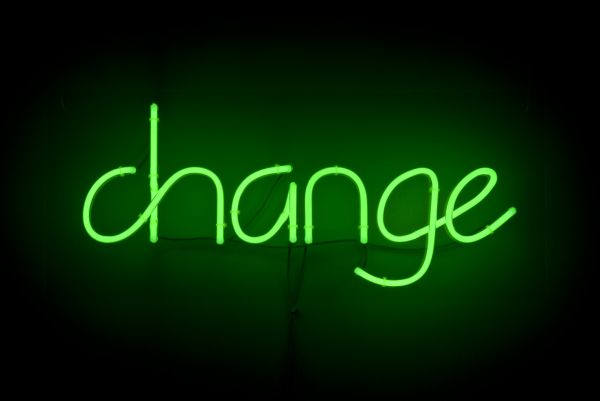 CHANGE counts on individuals. It does not act violently and offers individual choice, becoming a meditation on our efforts and possibilities to make change happen. The neon is operated by a single switch – each person can make a change themself. Will they turn the change on or off? The authors are Michala Lipková and Ján Turzo. 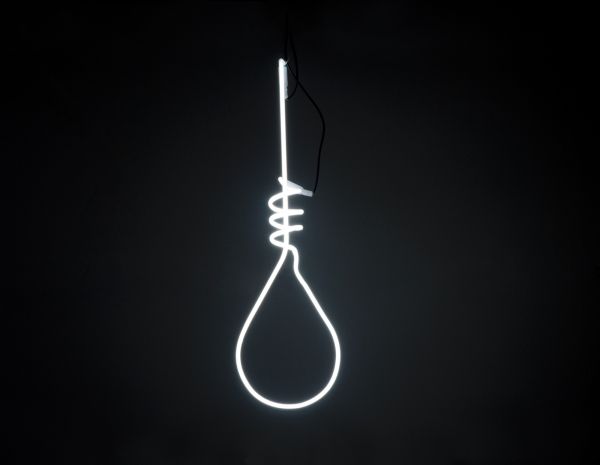 NOOSE sheds light on an absurd situation, with a strong taste of the impossibility of changing anything. The noose is a symbol of the infinity loop, focusing on human existence and playing with issues of ambivalence in the circle of life. The authors are Emília Jesenská and Peter Simoník. 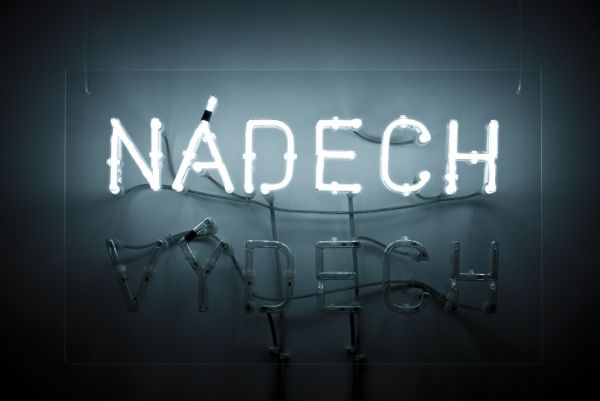 EUPNEA is reminiscent of cycles in which people form an inseparable part. Simulating the human breath, it slowly glimmers, spelling “breathe in” and “breathe out“, bringing a sign of life into the impersonal city. The authors are David Březina and Zuzana Kubíková. 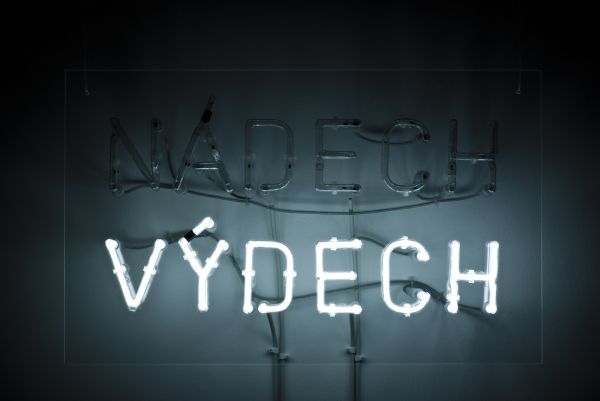 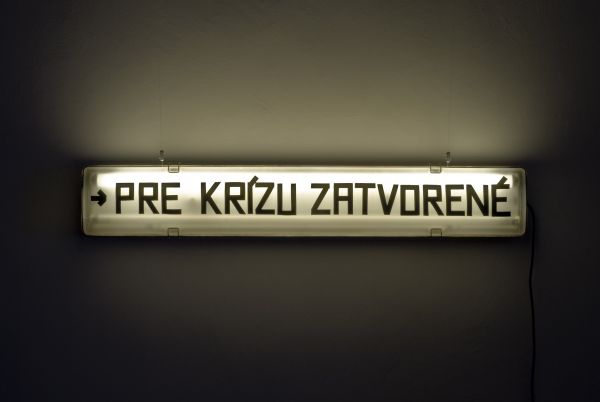 RICHARD FULD deals with the world economic crisis that led to the bankruptcy of several large Wall Street companies. Its name is borrowed from an American banker, the CEO of the infamous investment bank Lehman Brothers. The neon questions the relationship between economy and culture, how they define and influence each other. The neon tubes spell out: “Closed due to crisis”. The authors are Katarína Lukic Balážiková and Martin Mistrík, organisers of the project. 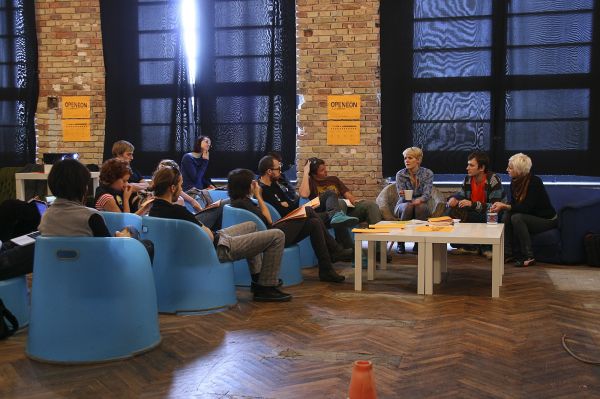 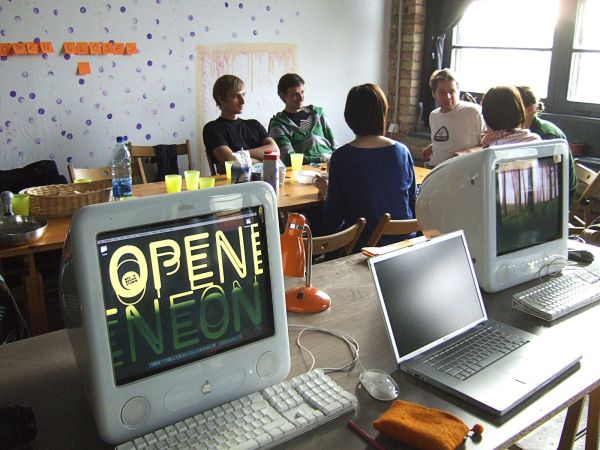 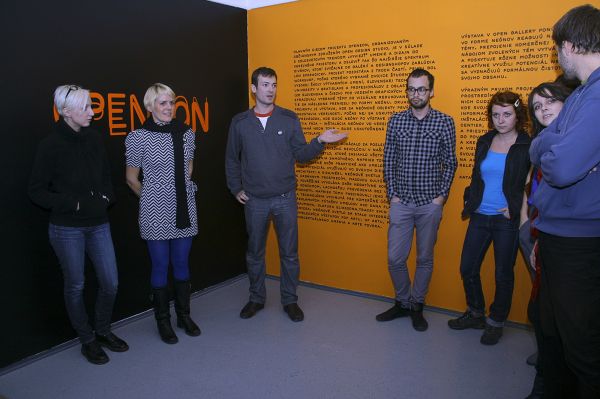 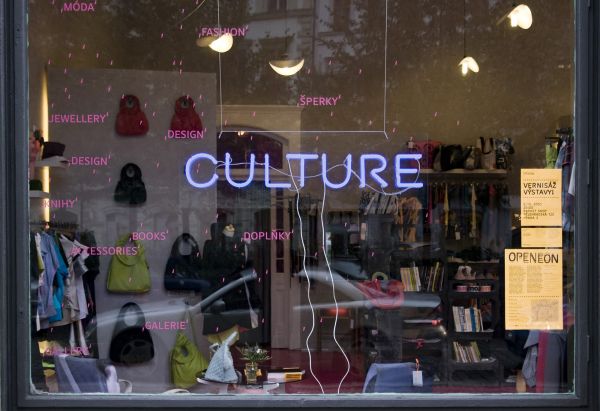 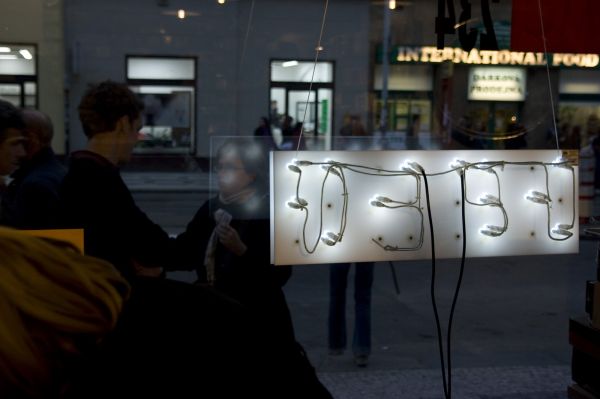 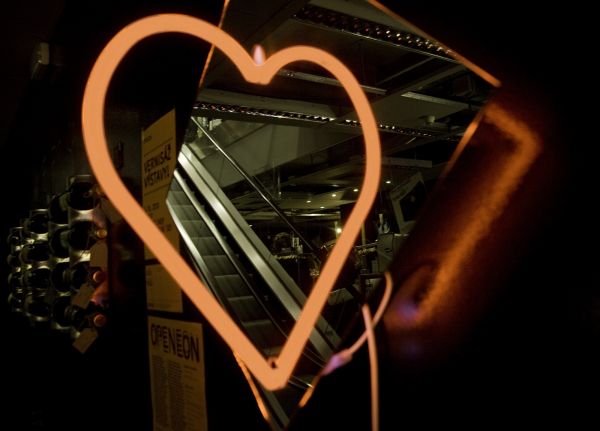 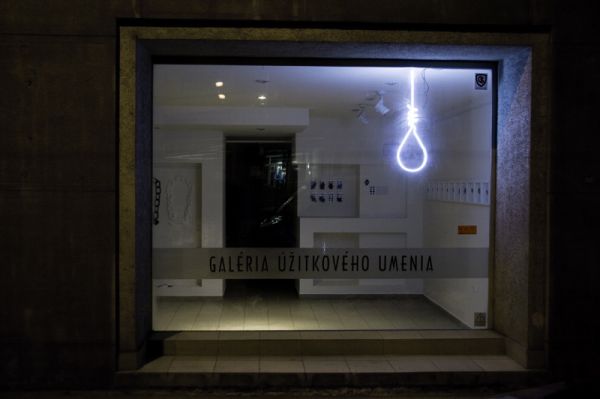 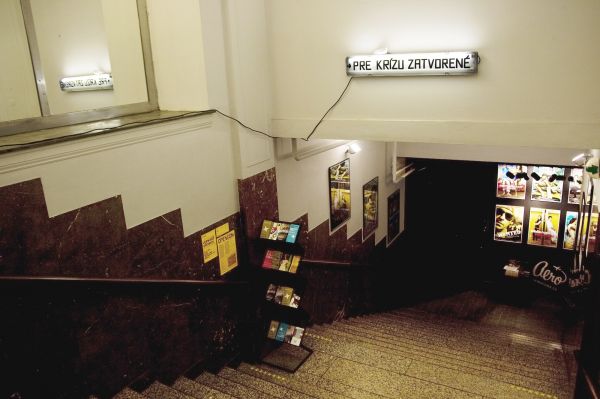 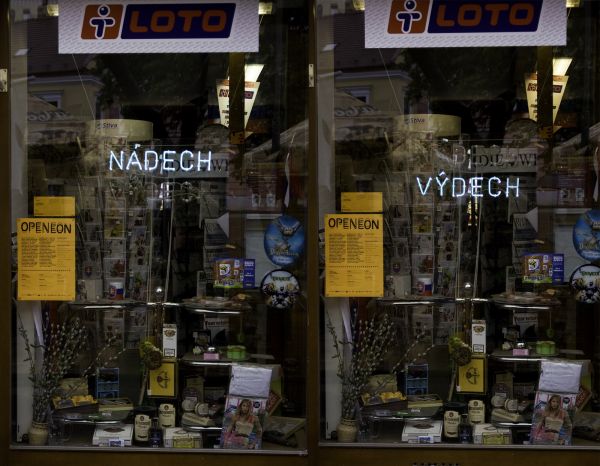 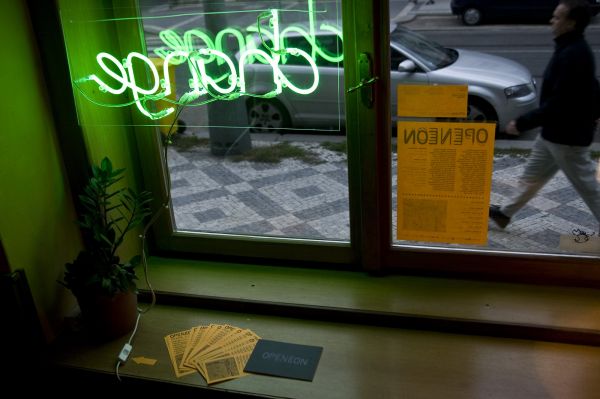