History (timeline) of tobacco (industry) seems to be crooked

In 2010, one of my relatives, a 70-years old passionate and almost life-time chain smoker (he used tobacco since his early teens) — started to have breathing problems — first signs of what ended being a terminal disease, as I learned just a few years later. In the light of this, I became furious once again — how has it happened that such harmful substance, such as tobacco, is solidly legal?

Contrary to alcohol, it is hard to consider tobacco as authentic part of “national heritage” — at least not for more than two centuries, and it can be considered more as something imported from “controversial” America. I also found out that there was an incident with the first European smoker, which was burned alive as possessed-by-demons, just because he popped out the smoke out of his mouth.

The long-time-adoption-process seemed to be one of the keys to establish some substance in society, but clearly not crucial, considering for example an “old-timer” opium, or once-legal-then-banned substances, as heroin or cocaine. Some result of the reflection was quite obvious — what kills you quite slowly and in the same time doesn’t derail you out of “normality Matrix” very much, could be tolerated by the legislation and thereby traded as any official product.

Back then, there was an opportunity to submit an article to 34 magazine, so I decided to “shed some light” on the topic and at the same time, do something out of my own anger to the deadly industry. I teamed-up with currently-wishing-to-stay-anonymous-under-threaths-of-filing-lawsuit writer "Memfer", which held strong anti-tobacco stance at the time. He already had some information on the topic at hand, so we put together the Tobacco Timeline.

Note to factual relevance; As "Memfer" had graduated with a physics degree, I hoped hat he would have some academic-grade-standards of working with facts. However, later he started to write fake news and plain propaganda for "alternative" pro-Russian media outlets and in the light of that —some information may need review.

For the favor of the straightforwardness and expressiveness, I employed the quasi “Jehova-witness-Watch-tower-ish” allegoric graphic style, mixing pictorial analogies (for the events where I could not find related sources) with related imagery, everything floating around crooked-cigarette timeline with national flags as marks for the events. It led to the footnotes at the bottom explaining them.

After the article was published, there was a further development in limiting tobacco advertising and smoking in public spaces itself, mainly due to the European Union’s initiatives. 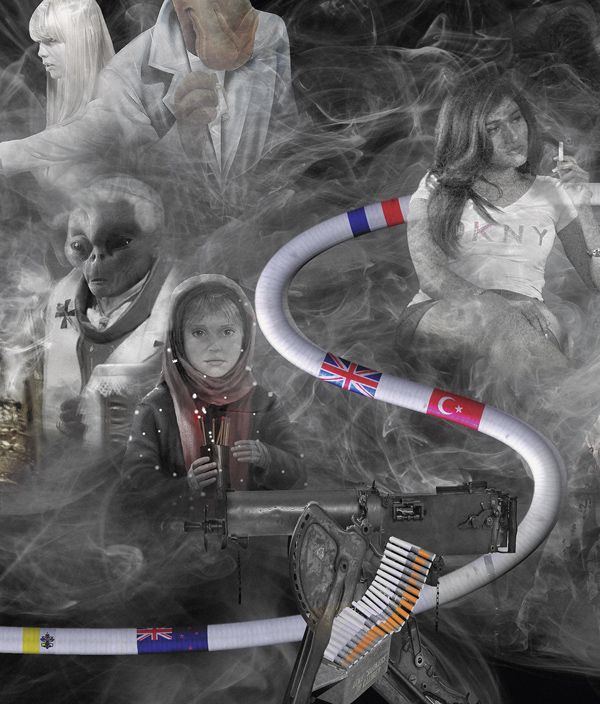 Detail of an illustration, Pope Benedict XIII who was sniffing tobacco and discarded papal bulas forbidding its use