In design and politics, you have to choose the best option there is

In the beginning, there was a discussion about candidates and whether or not to vote in the Slovak presidential elections of 2009. Personally, I never had a dilemma about whether to vote — every time there was an election or referendum (additionally, I sign petitions frequently) — as I believe that it is my duty as a citizen.

Thus, I was quite surprised when I have seen within my circle friends and colleagues (communication designers), whom I hoped were of the same mindset, many were either reluctant to vote, or were actively refusing to.   —. Their main, and possibly only, argument was that here was no candidate who is strong enough to make them get off their sofas and go vote. They chose not to vote at all, which is also their right.

Despite my shock at thier misunderstanding of basic democratic principles (as I saw them), I tried to persuade them with an comparison from our field:
Imagine that you are at your friend's home for a birthday celebration and he needs your professional help to produce a sign like “Birthday party on 2nd Floor.” In the apartment, you have just your friend’s computer so there are not many fonts, and those that are there are not very interesting. What you would do? Are you gonna say — Sorry, my friend, but due to the bad conditions you gave me, I am resigning now as a designer and I can’t help you, or would you pick the best typeface what there is, even if it is Times New Roman and do the job, instead?

Unfortunately, my argument didn’t convince them (and election itself finally ended up a disaster from my point of view, too), but it served as inspiration for a set of three posters designed to present three main presidential candidates as a different typeface characters, which in my opinion suited them. I also used it as a opportunity to train typesetting. Texts used in the specimens were either quotations or excerpts from their speeches. The posters were later included in the Trnava Poster Triennial exhibition. 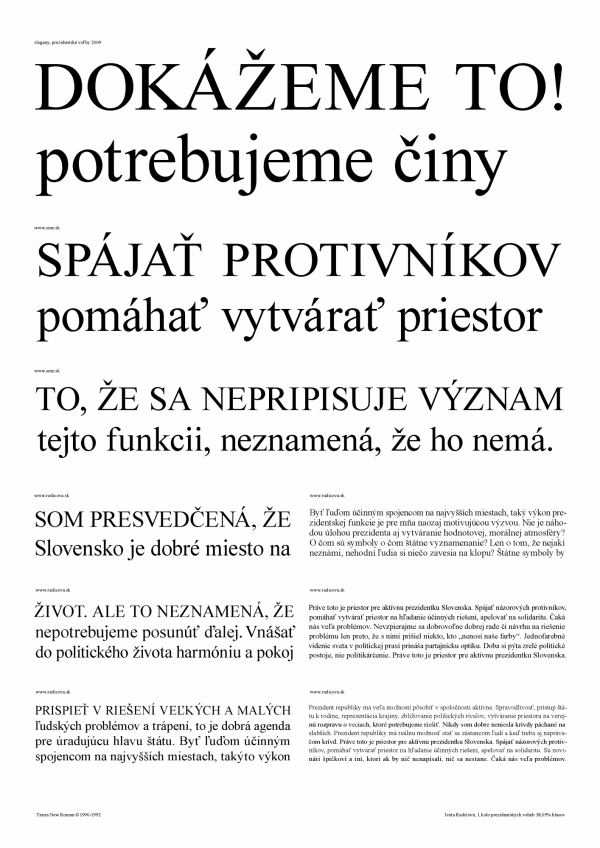 Iveta Radičová (my preferred candidate in 2009) — Pros: Solid with liberal views, with a pro-western orientation and sociology background. Cons: In Slovak context — Insufficient of populism — not quite persuasive for general public. 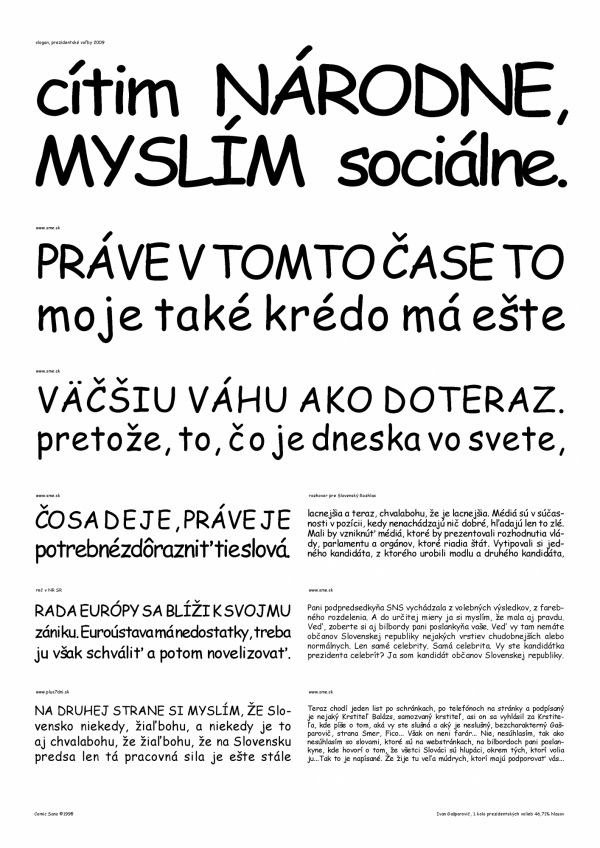 Ivan Gašparovič — Pros: For me — none. Cons: Populistic, intentionally stupid conservative political views, ties to the post-revolution privatisation organised crime groups and Vladimír Mečiar regime (which survived the public divorce of those two politicians). Famous for unintentionally funny errors in speeches pointing at incompetence, too. 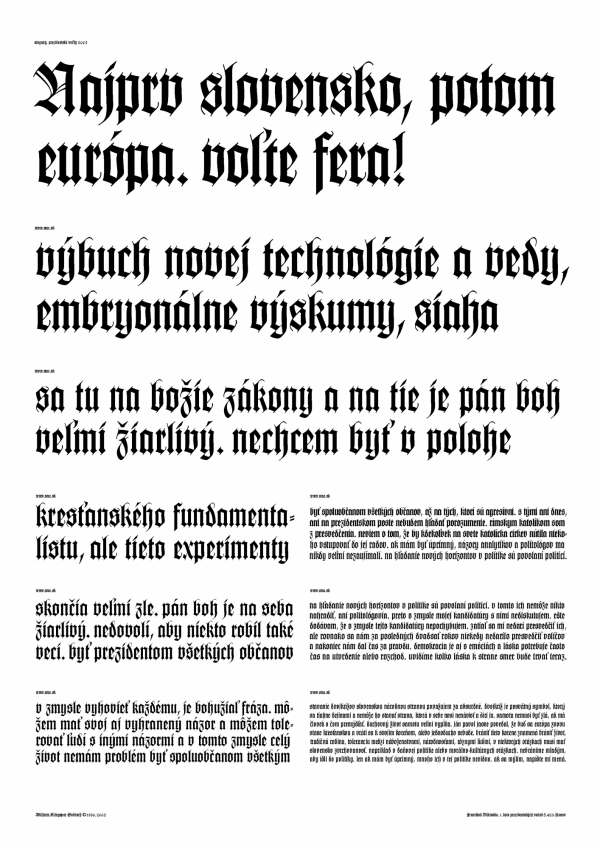 Ivan Mikloško — Pros: Only one — he was not Ivan Gašparovič. Cons: Rigid, religionous, ultra conservative stances, often evoking a Middle Ages vibe. In the end, his stubbornness, which causedhim to divert some voters from Iveta Radičová in the 2nd round of voting, let Gašparovič win the election.