Scrolling down his screwed and twisted spine, we go from his beginnings in KSS, through founding his own party and biggest corruption scandals to the election victory in 2012, when he arranged a one-coloured government. The web is also full of Fico's untrue quotations, which pop up here and there and support the clear opinion of the authors: This man is not the right candidate for president and even not an appropriate prime minister, because he lies, cheats and manipulates all the time.

However www.pozoruhodnachrbtica.sk is not only about blaming Robert Fico. It works with verified information and constructive criticism."We decided not to mention any girlfriends or expensive watches because we consider it cheap, yellow and these facts are not real reasons why someone can't become a president,"wrote Jakub Goda about the anti-campaign in his blog. Yes, it is an anti-campaign, but before we call it like that we have to realise what kind of anti-campaign it is. It's an independent activity of people who are not in politics but they are into it. Their intention is not to promote their political ambitions, but to help people understand a problem. And that's the reason why their humour is so juicy, open and critical.

For instance, this can't be said about another campaign against Fico which started SaS at the same time. Although they attempted to create some kind of comics meme, the message is boring and complicated. The whole campaign appears as a crampy and poor hate. On the contrary, the www.pozorohudnachrbtica.sk with its 175 000 views is, in my opinion, a successful political satire. Therefore I'm sorry to say that it was a one-shot action. It said what it was supposed to say and it fell asleep without being updated. It's a pity because this kind of humour is disappearing from our media.

Yes, we are sharing cynical pictures about everything, but it is much more difficult to be funny on the one hand and on the another promote also some valuable information. There is a question if graphic designers are afraid to confront themselves with politics or they are just not interested in such topics. I don't have ananswer yet,but I think there could be more designers who feel the importance of good political satire in our media. So the big like for www.pozoruhodnachrbtica.sk and more remarkable projects, please! 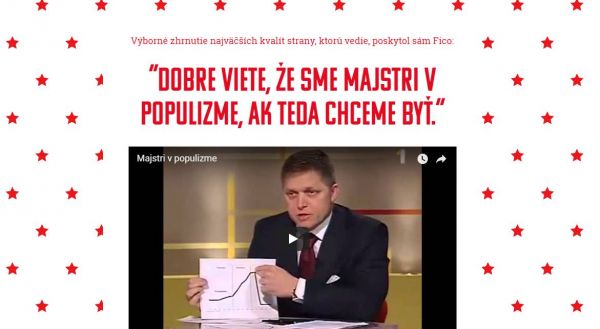