He is one of the most famous caricaturist in Slovakia

His caricatures can also be seen in publications like Tuhou Tuhou (With the graphite, with the graphite), Modra knizka (Blue book) or Roky Fica I, II (Fico Years I, II). He won also The Journalistic Award for cartoons in SME in years 2004, 2005 and 2007.

Shooty had studied on graphical high school and later he attended VŠVU. During studies he had been working as a graphic designer until he realised that it is not his cup of tea. He is co-founder of graphic studio Komplot. In 2002 he returned to VŠVU to finish his doctor’s degree. However he realized, that he doesn’t need the degree. “Art will heal itself, even without my help,” he says.

His satirical cartoons invoke all kind of emotions and reactions. Politicians sue him, extremist hate him, but public can’t imagine Dennik N without his commentaries. He mainly address criticism of society and politics. Often heckles politicians in highest circles. His job is very important nowadays - heckle and point to mistakes of politicians and corruption of our society. It is extremely necessary directly draw attention to these problems and Shooty is doing great job. What he’s trying to say is that everybody should have their eyes open, create their own opinion and have critical thinking.

He’s not avoiding from pointing out mistakes and cases of prime minister R. Fico himself, who is often target of his commentaries and cartoons. Fico is often shown as block or mail box. When Shooty drew caricature of prime minister without backbone, he was facing prosecution. 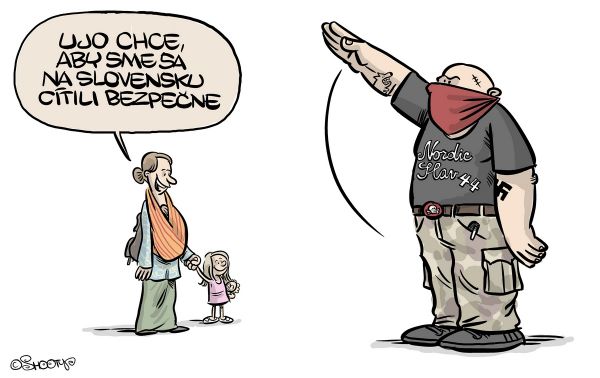 On this caricature Shooty show extremist given Nazi salute. It refers to the big problem with extremists in Slovakia. 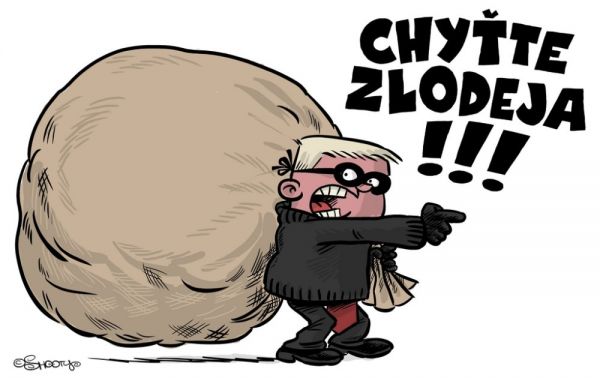 Shooty show on caricatures a corrupt government and make fun of Robert Fico.